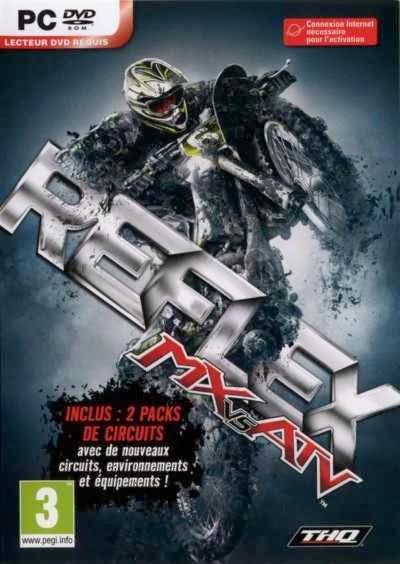 MX vs ATV Reflex (PC-ENG-2010-Repack by R.G. Mechanics)
English | PC | 2010 | 3.22 GB
Genre: Action \ FPS \ Stealth
MX vs. ATV Reflex continues and develops the game series, familiar to all fans of extreme virtual racing. In the new episode of riders waiting for realistic physics, tracks, changing in real time, and a new management system that enables a truly deadly tricks! Physics is responsible for technology Rhythm Racing 2.0, due to which vehicles jumping on the bumps and break down into a skid as plausible, and departing from the saddle rider falls and tumbles just like this. In addition, each passed on the highway circle significantly alter the road surface. ATVs, motorcycles, jeeps and other all-terrain wheels literally plowed soft pliable soil, leaving behind a rut - the soil is deformed in real time!
To stay in the saddle and the first to reach the finish line, riders need all of his skill and dexterity. In MX vs. ATV Reflex has a new control system, the player directs the vehicle and the driver separately. This allows you to perform insane stunts and literally on the reflex level athlete to hold the saddle in dangerous situations.
With whatever face desperate daredevils - with rapid rivers, marsh topyu or sand dunes, they can overcome all obstacles. Importantly - believe in yourself and firmer hold on the wheel!
Game Features:
Intuitive controls-Player uses just two analog stick. One is responsible for managing the motor-or ATV, and the other controls the rider. It allows you to perform a variety of tricks. For example, to lay the most abrupt turn and enter a dangerous turn, must not only turn the steering wheel in the right direction, but also to tilt the driver - the offset center of gravity will help to make the maneuver more quickly.
Overview reflexes-In any extreme sport to make split-second decisions, and race MX vs.
ATV Reflex - is no exception. If, after a failed stunt player has time to react and give the rider the right position to be able to stay in the saddle!
Track under the wheels-Trail surface varies in real time. The wheels of cars and motorcycles on the track left photorealistic ground, with each new round deforming the track.
Deadly stunts-Management racer through the analog stick allows you to lightly carry dizzying stunts. The more dangerous acrobatic reception, the more points you receive an athlete!
Huge car park-Conquer the roads in MX vs. ATV Reflex can be on a motorcycle, ATV, UTV, buggy and special jeeps.
Repack Features:
Includes Update 2
Do not cut / recoded
Important:
Before the first start you need to run the game settings from the folder in the "Start"
or A directory with the game / MXSettings.exe
Download Link Part 1
Download Link Part 2
Download Link Part 3
Download Link Part 4
Download Link Part 5
Labels: Game